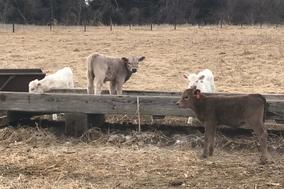 West Fork Ranch is located in Loup City, right in the heart of Nebraska between the sand hills and the Platte Valley.We have a great balance of rich farmland as well as some great native pastures.

West Fork is a family-owned and run ranch that is dedicated to raising cattle the excel in performance as well as keeping maternal traits in tact that utilize the vast resources for maximum efficiencies adding more to everyone's bottom line.

Henry and Eleanor Wilson along with their daughter Roseann run 500 purebred and commercial cows on their 10,000-acre farm and ranch. The Purebred Charolais herd was started 17 years ago. Henry went out and bought some very high-powered cows to build the foundation that the herd is derived from today. 6 years ago, Henry saw the potential of complimenting the Charolais herd with a registered Red Angus herd. Through the acquisition of some of the foundation cows in the Panhandle Cattle Co herd and embryo transfer, the herd became a reality. Angus hybrid cows makeup the majority of the commercial herd that produced cattle that we send to the feedlot for carcass testing as well as the occasional club calf.